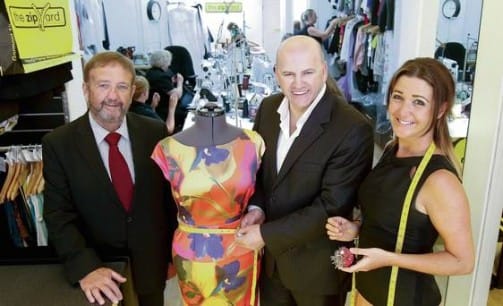 The Zip Yard Gets Indo Write Up

Don and Caroline told Sean how they plan to keep moving in challenging economic times and open 15 more stores in the Republic of Ireland. Dress and clothing alterations is a fast mobing business and the family duo went onto explain where it all started for them.

Where did they first come up with the idea?
“At the time we were running another franchise business called Recognition Express, specialising in making corporate name badges and branded promotional products mostly for the retail and hospitality sectors,” explains Don. “However, because many of our customers’ businesses were badly affected by the downturn, our turnover had literally collapsed,” he adds.
As revenue’s were falling at the time in 2008 for many businesses in Ireland, Don and Caroline decided that another stream of income would be need to sustain them and their staff into the future. And so The Zip Yard idea was sewn (excuse the pun) by almost accident.
They began travelling the country, desperately looking to identify their next big idea. Having almost given up hope, it was while they were on a family break in Belfast that they came across it.
“We were out for a walk around the Harland and Wolff shipyard area of the city, when Don spotted a small alterations business called The Zip Yard,” explains Caroline excitedly. “His mind quickly began racing and, with his knowledge of franchising, he began to come up with all sorts of ideas as to how the business could be developed into a franchise operation,” she adds
And the rest, as they say, was history! The Zip Yard garment alterations has now grown to over 20 stores in Rep Ireland and as mentioned previously plan to establish more in the very near future both here in Ireland and further a field internationally.
Recently The Zip Yard have teamed up with Julie Cobb of Stylefish and have even established a collabration with a national fabric retailer, but more to come on this at a later date.
All in all Sean was very impressed with our father and daughter team and see’s even more success on the horizon for The Zip Yard in the future.
Well done guys, we’r proud of you!
See the original article here: https://goo.gl/LGNkpg
Categories: Fashion, Industry News, Info Articles, Press Releases
Author: The Zip Yard